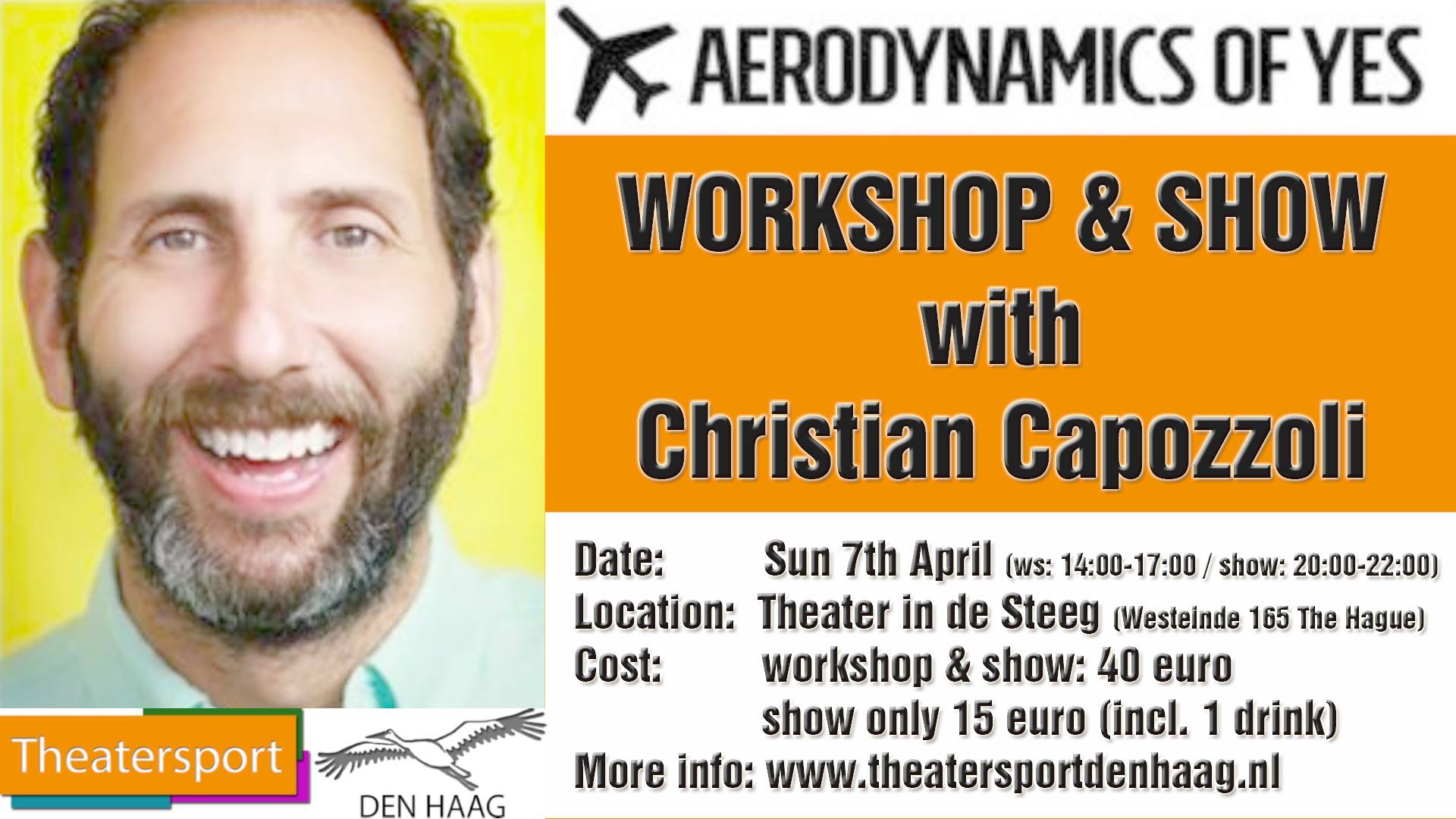 Sunday 7th of April the hilarious and talented Christian Cappozoli will visit The Hague. You can do a workshop (in english) with him and/or visit a show with him in the evening.

In the workshop in the afternoon we will focus on some of the following techniques:
- 4Track
- Monoscene

In the evening some of the workshop takers will perform in a show featuring Christian Capozzoli.

4TRACK
The 4Track form demands you rush the stage with confidence and connectivity. Ratchet, bounce and build scenes to a boil, then tumbles into an avalanche of distilled and pithy callbacks. This form rejoices bold choices, physicality, and split second agreement and celebration. Create tension, Take action, and explore characterization through wants, and spine and choice.

MONOSCENE
Bring modulation, stakes and character clarity to your Monoscene. Use stage-craft and specificity to give torque and traction to your scene, explore the location and use it to fuel your discoveries and declarations. Play with fearless physicality and hairpin emotional shifts.

CHRISTIAN CAPOZZOLI BIO
Christian Capozzoli is an American actor, author and improviser whose improv methods are taught the world over. He has a B.F.A. in Writing, Literature and Publishing from Emerson College and a Masters in Literature and Education from Harvard University.

Christian Capozzoli has had the fortune to work with top comedic voices in TV and Film, including Stephen Colbert, Lena Dunham, Robert Smigel and Adam Sandler. Capozzoli directed the Amazon special "Something from Nothing” and has worked along side legendary comedic instructors Mick Napier, Charna Halpern and Armando Diaz.

AERODYNAMICS OF YES
Get familiar with the Aerodynamics of Yes techniques of improv. This is a course designed to help performers build upon prior improv training. It sets out to create a bedrock foundation for you as a self reliant, team-playing, fun-chasing improviser. This is for improvisers that want a refreshing new slant on the way they play. Learn to advance and expand your ideas and weave them into rewarding scenes and narratives, with pronounced games.

Christian Capozzoli has been honored and recognized as one of the top improv minds and instructors in the world. His one man show Nutso Facto, toured North America and Europe, receiving rave reviews from both the New York Times and Post.
His Aerodynamics of Yes: The Improviser’s Manual provides readers with the essential tools to unlock imagination and celebrate each other.